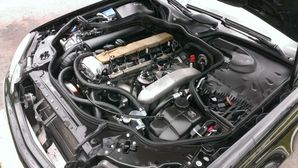 The Automotive Test Scope ATS5004D is in this article also referred to as automotive oscilloscope, diagnosis oscilloscope and lab scope.

Problems in modern cars can be complex to diagnose. Reading fault codes is usually the first step in diagnosing a problem, but measuring with a lab scope is sometimes the only way to perform a diagnosis, as can be read in this article.

This Mercedes E-class got slower and slower to start and destroyed a battery. It was manageable by jump starting the vehicle off a spare battery kept in the boot. Eventually the owner of the vehicle had enough of this situation and purchased a new big starter battery for the vehicle. The vehicle was still slow to start and again it left the owner of the vehicle stranded. At this point it was decided to tow the vehicle to a local garage who had the car for a week without any starting difficulties. Meanwhile the number 6 injector had started chuffing (blow by) so it was removed and sent away for testing. During this time the battery was left disconnected. The injector tested fine and was refitted with a new copper washer. After that the vehicle didn't want to start at all. It cranked but didn't fire up. The local workshop diagnosed it as a "computer" fault after having the vehicle scanned by a colleague. The used scanner showed a few codes in total, of which some were "unknown" and "hidden" codes. The technician thought that having the battery disconnected for a week could have cleared the ECU/immobilizer key memory. He then sent the car to a customer of AECS who has an Automotive Test Scope ATS5004D, proper scantool and AECS technical support.

With a recently updated scantool the second workshop was able to scan the vehicle correctly and have full communication with all 28 control units on board of this highly specified vehicle. A full system scan revealed that 26 out of 28 ECUs had registered one or more fault codes. Diving deeper into each system showed that there were in fact no "unknown" or "hidden" fault codes. This is simply the result of the scantool reading a fault-code that has not been programmed into the tool's fault-code database and is a classic sign of an under developed tool. The first system that needed attention was the diesel injection ECU. The vehicle doesn't fire up so this must be where there are some issues? 15 stored fault codes were found with no active codes in just the engine ECU alone.

AECS recommends to print all the fault codes before clearing them, as stored or history codes can hold valuable clues to where the fault may be. So the technician did this and he had a full printout of all codes in all ECUs. The most prominent codes throughout all the systems were "supply voltage low" and "CAN bus error". Given the history of the vehicle (battery started till flat many times) it was no surprise that these codes were stored, the technician proceeded to clear all codes. Amazingly after redoing the full system scan only four modules still had fault-codes, all unrelated to starting issues, yet no firing up of the engine was possible. This is where the technician phoned AECS for support as also in his mind none of the remaining fault codes where preventing the engine from starting. He proved absolutely correct!

After running through all the fault-codes with AECS technical support helpdesk it was decided to check all the earth circuits to at least the engine ECU as one broken sensor earth can cause multiple sensor voltages to go outside of fault-code parameters. Furthermore one ECU losing power supply can cause CAN bus communication errors in multiple ECUs. With the battery in the boot there are many junction points, spot-welds and earth straps that could be faulty throughout the system. Hoping for the "quick-fix" the technician sanded, copper pasted and re-tightened the main earth points in the boot and the main earth points he could find under the bonnet. Again winding over but no fire up.

There is no avoiding it now and only by a stroke of luck would you be able to solve a problem like this efficiently without an oscilloscope. The workshop was well equipped with an Automotive Test Scope ATS5004D, and an Diesel Return Flow Sensor RFS400. The first measurement to be done in a situation like this is injection over rail-pressure, a simple two channel measurement that will tell you most of what you need to know on almost all common rail Diesel engines with a no fire up problem. 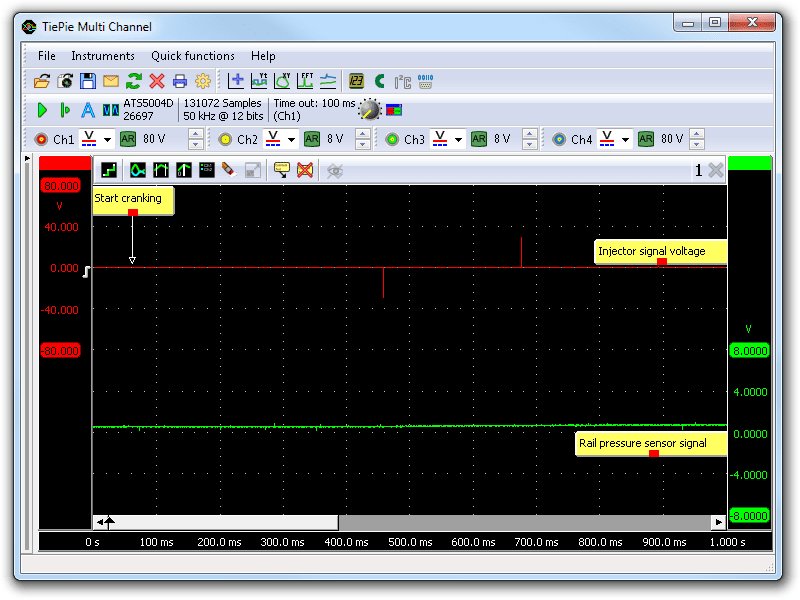 From figure 1 we can see that there is no injection occurring while cranking. What are the possible causes?

Using the four channels of the Automotive Test Scope ATS5004D, it is possible to see more at the same time. The measurement in figure 2 shows injection with rail pressure and crankshaft sensor output measured at the ECU. 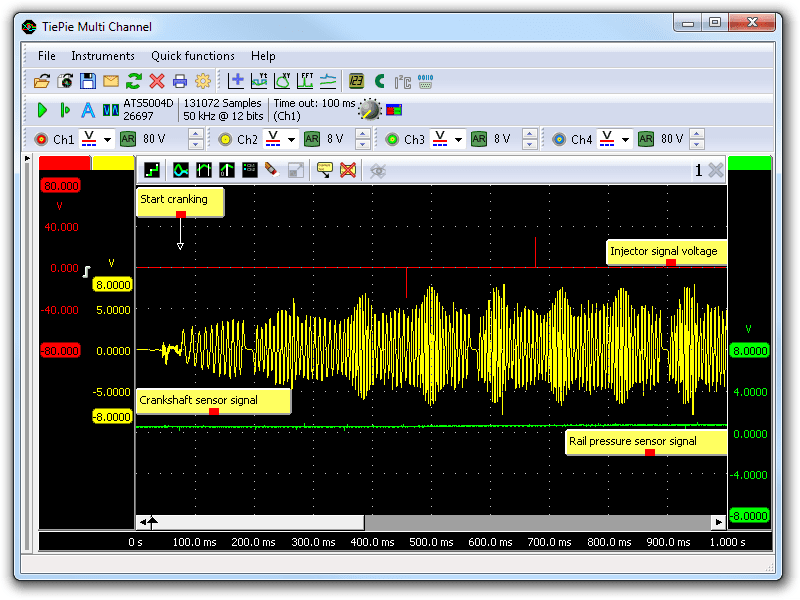 This question we answer by thinking as a designer. Would you open the injectors, draining fuel from the fuel rail, if the desired fuel rail pressure hasn't been achieved? To check this logic a higher voltage was generated on the rail pressure sensor with an external voltage source while measuring injector activity during cranking: this made the engine run! Of course when the rail pressure sensor voltage is simulated higher the actual rail pressure is lower when the system enters closed loop pressure control, so the simulated extra voltage was quickly dialed back to 0 once the engine was running. After a test drive fault-codes in engine management system were checked but no fault codes were present, indicating no major electronic issues. With the engine now running a high pressure leakage test of the whole system can be done by simply measuring the drop in rail-pressure voltage during fuel cut. Figure 3 shows a drop in rail pressure of 0.453 V in 0.5 seconds during deceleration fuel cut. Knowledge tells us that this is approximately 2.5 times an acceptable level of leakage on a Denso common rail system. 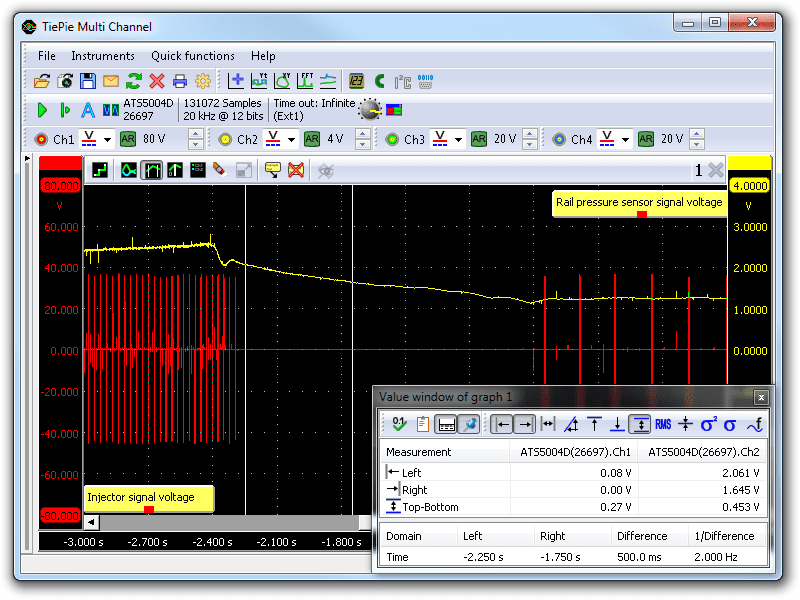 Where is the leak?

At this stage it was end of day and the vehicle was left overnight. The following day the vehicle wouldn't start again. A quick confirmation measurement of rail pressure over injector was done with the same result. It could be air in the lines with a slow leak into the fuel supply to the high pressure pump, but this system runs an electric lift pump in the tank which automatically bleeds the low pressure system. The lift pump pressurizes the low pressure system to approximately 5 bar which would have shown up a leak. So the problem is not with air entering the supply side. After starting the car with the external voltage source attached to the rail pressure sensor, another test drive was done to see if we had full power, reducing a possible pressure discharge valve and SCV issues (the high pressure control valves). This really only left a high pressure fuel leak from the injectors. The 4 channel Diesel Return Flow Sensor RFS400 was connected to the first four injector return lines to check injector leak back, see figure 4. We know that during winding over and not firing up, there is no injector activation. 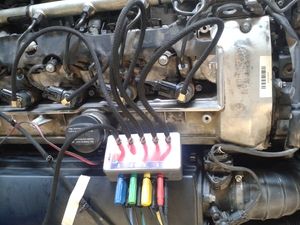 Figure 5 shows the return flow measurement during cranking (not firing up). 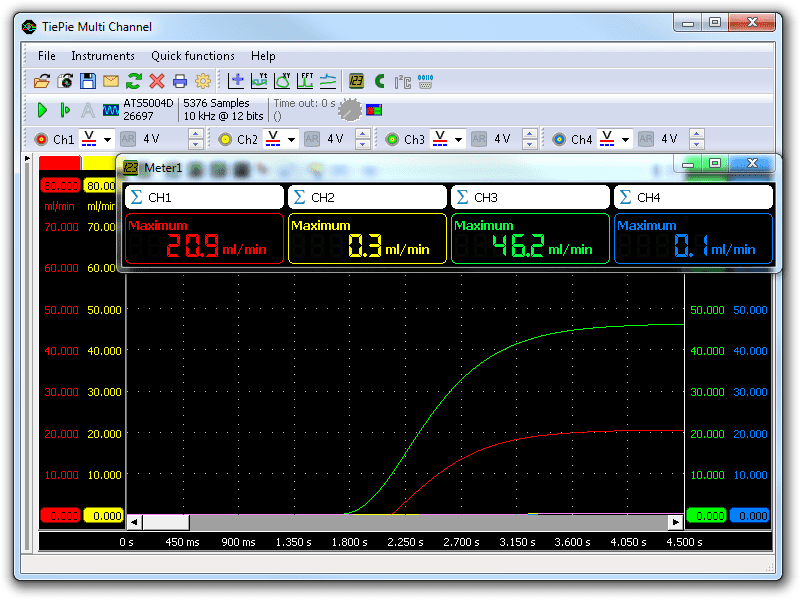 We have found why the high pressure rail pressure remains too low for injector activity. When the injectors do not get activated, the return flow should be zero. Two injectors show 21 and 46 ml/min return flow during cranking! That is fuel that does not stay in the rail.

Due to the high mileage of the vehicle and previously unknown service history it was decided to fit 6 re-manufactured injectors. Winding over (after bleeding the system and letting the vehicle glow) it started within a few beats. This is the point at which most workshops wrap up the job and send it out the door. Luckily the technician was convinced to recheck one measurement. Remember figure 3 shows the deceleration rail leakage with the "bad" injectors. Figure 6 shows the same measurement with the re-manufactured injectors. 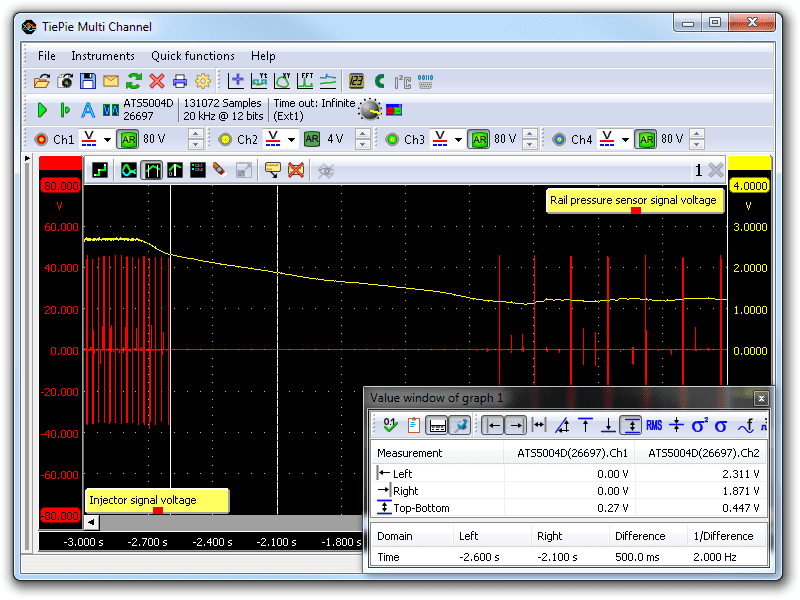 Figure 6: Deceleration leakage with 6 re-manufactured injectors
Figure 6 still shows that we have a high leak rate compared to the Denso reference. It turns out that this CP3 system has got closed loop pressure control under deceleration and that there is a difference in the duty-cycle control of the pressure dump valve during deceleration.

Knowing the system in detail (training) and having the correct tools (Automotive Test Scope ATS5004D and Diesel Return Flow Sensor RFS400) and skills for the job made this a very quick diagnosis. Don't let stories like "ECUs loosing memory", "unknown or hidden/secret fault codes" or Googling common faults put you off during your diagnosis, those stories just suck the confidence and money out of any technician. Unnecessarily replacing an ECU is an expensive exercise and is something AECS encounters more and more. The technology in this vehicle is now main-stream, make sure you can rely on your knowledge, tools and support network (like AECS tech support).