Honda Jazz holds back and stalls 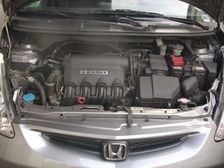 Properly diagnosing a problem in a car is often more than just hooking up a scanner, reading the error codes and replacing the components that are indicated to be wrong. When the internal computer does not have any error codes stored, it's up to the mechanic to diagnose the problem. Good knowledge on how the engine works is very important. Also the right tools are important and nowadays, with the complex engine systems, a good automotive diagnostic oscilloscope is essential in proper diagnosing car problems.

A garage is dealing with a 2006 Honda Jazz with L13A i-DSI engine. When warm, the engine occasionally holds back and sometimes even stops. One time the problems are worse than on other times.

There were no error codes stored in the car. The Engine Control Module (ECM) has been replaced and several other components were swapped with an other car. Even the cruise control unit has been removed. A lot was driven in the car with a scanner hooked up to monitor the "live data" to find an anomaly in sensor or actuator data. Nothing showed up. GMTO was then called for assistance.

The Honda Jazz is equiped with an i-DSI engine, which stands for intelligent Dual Sequential Ignition. The Honda i-DSI engine has two spark plugs per cylinder, each with their own coil, power connection and control signal. This causes the combustion to go faster and gives a higher engine output. The two independent coils and control signals allow to fire the plugs at different times.

The two spark plugs are fired sequentially, the time between the two sparks depends on the rpm and the engine load. When idling, the two plugs are fired simultaneously. At lower rpms, first the plug at the intake side fires and shortly after that the plug at the exhaust side fires. At mid range rpms, the time difference becomes larger and at high rpms, the time difference decreases again. 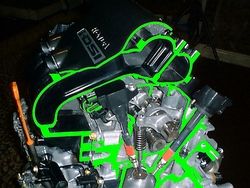 Measuring with an automotive oscilloscope

Since there were no error codes, a good automotive oscilloscope is the only usable diagnosis tool. The problem only occurred while driving, so the automotive lab scope was installed in the car and connector to the various signals using long measure leads. The measure leads are specially designed to be very insensitive to external distortions, which are always present near a running car engine.

The first signals to check are the ignition signals and the fuel injection signals, as these are the main signals that must be correct to make an engine run. Figure 1 shows the first measurement. Channel 1 measures the control signal for an ignition coil, channel 2 measures an injection signal and channel 3 measures the output signal of the MAP sensor (engine load). The automotive oscilloscope is setup to measure for several seconds at a high sampling rate. An external trigger button triggers the lab scope, which then stores 3 seconds of data before pressing the button, so the problem can be easily captured. The car was driven and after a while, the engine held back and the trigger button was pressed. The signals with the moment that the engine held back were captured and stored. 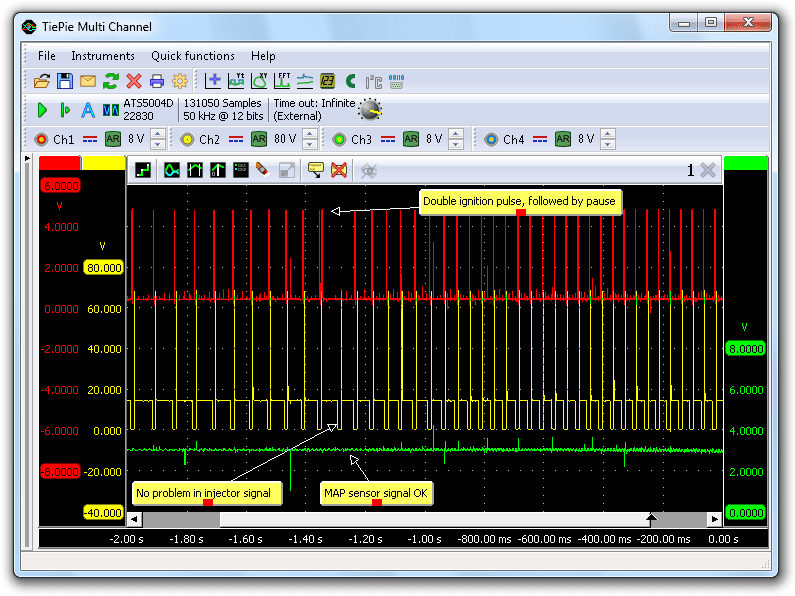 The measurement in Figure 1 shows an anomaly in the ignition signal. After the normal signal from the ECM, an extra pulse is seen, then a pause and then the normal pattern returns. The injection signal and the MAP signal showed no strange things. The cause of the problem is not yet revealed, so more examination is required.

The next step is to measure ignition (Ch1) and injection (Ch2) again and now add the crankshaft signal (Ch3). After driving the car, the engine held in again and the signals were captured, as shown in figure 2. 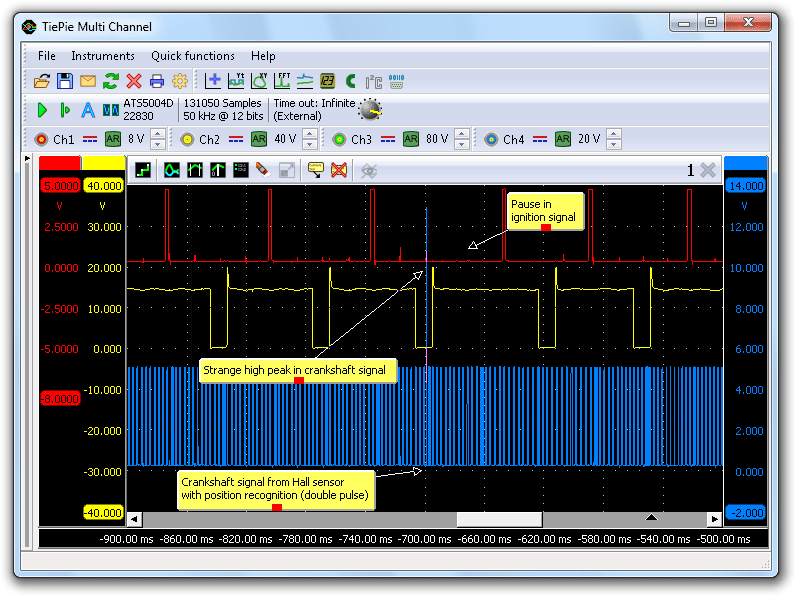 Looking back in time and zooming in revealed another anomaly: a strangely delayed ignition signal pulse and a strange pulse on the crankshaft signal. It seemed like there was an extra (short) pulse on the crankshaft signal. An extra pulse can "confuse" the ECM, thinking the engine is at a different position than it actually is, and generating wrong ignition and injection pulses. Further analysis showed that this extra pulse appeared to be simultaneously with the ignition pulse for a different cylinder. The ignition pulses for different cylinders are visible as small peaks on the signal, caused by cross-talk.

The automotive oscilloscope was now connected to the ignition and injection of cylinder 4 and to the crankshaft signal. This time both coils were measured on the four channel automotive lab scope. A new test drive was made and when the problem occurred again the signals were captured, see figure 3. 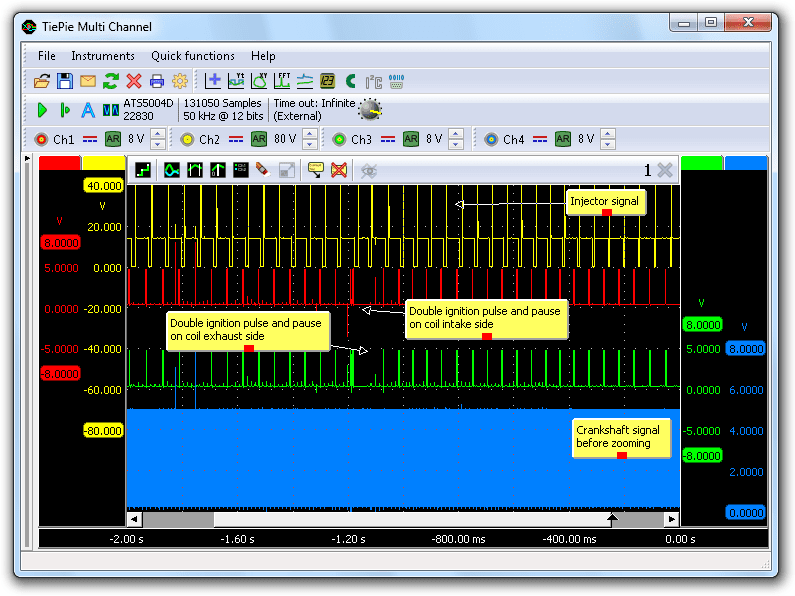 Both ignition coils got an extra pulse, followed by a pause. This still does not reveal the cause of the problem. By zooming in, the signals could be examined much closer. Figure 4 shows the same signals, but now zoomed in to a level that the individual crankshaft pulses are visible. 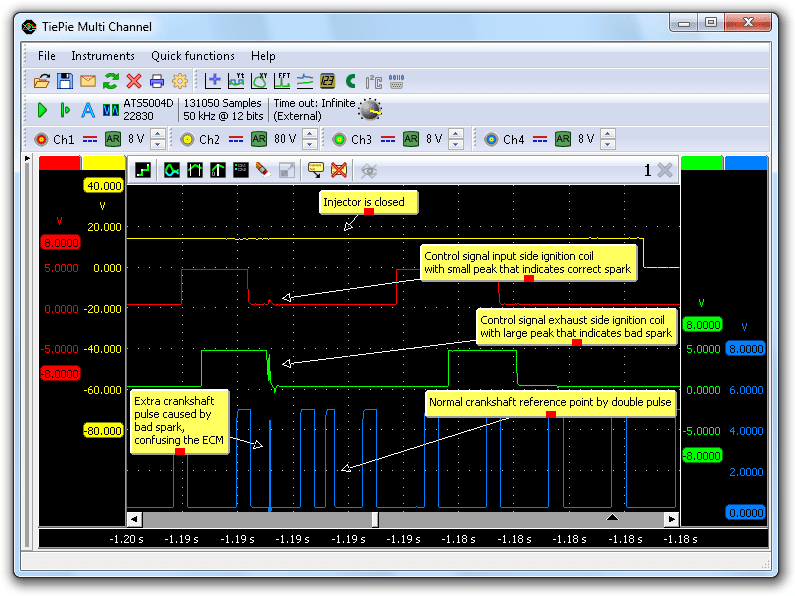 It is now visible that the falling slope of the exhaust side ignition signal shows a large distortion. The spark plug fires at the falling slope of this signal. This distortion is probably caused by a bad ignition coil or a bad spark plug. The spark plug at the exhaust side was then removed and it looked worn. The gap was large and the center electrode was rounded off.

The spark plug was replaced by a new one and the problem was gone.