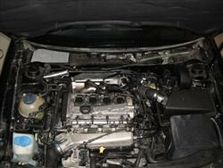 A 1999 Golf 4 turbo GTI with AGU engine and a maximum power of 109 kW was having serious problems with accelerating. Accelerating from 0 to 80 km per hour would take approximately 16 seconds, which is far too long for this car. Apart from the lack of power, the engine would hold back every half second and produce a lot of explosions in the exhaust.

The garage could not pull any error codes from the car. They had to rely fully on their own diagnosis. A lot of components were replaced, including the turbo, the ECM, Mass Air Flow sensor, ignition module and a turbo pressure valve. Nothing helped, the problems remained.

The first measurement that was performed was a check of the engine power. With the Accelerometer TP-ACC20 connected to the diagnosis oscilloscope, a test run was done: accelerate the car with full throttle through the second gear. A special function in the automotive lab scope software then calculates the actual speed and the engine power from the measured signals and displays both graphs. 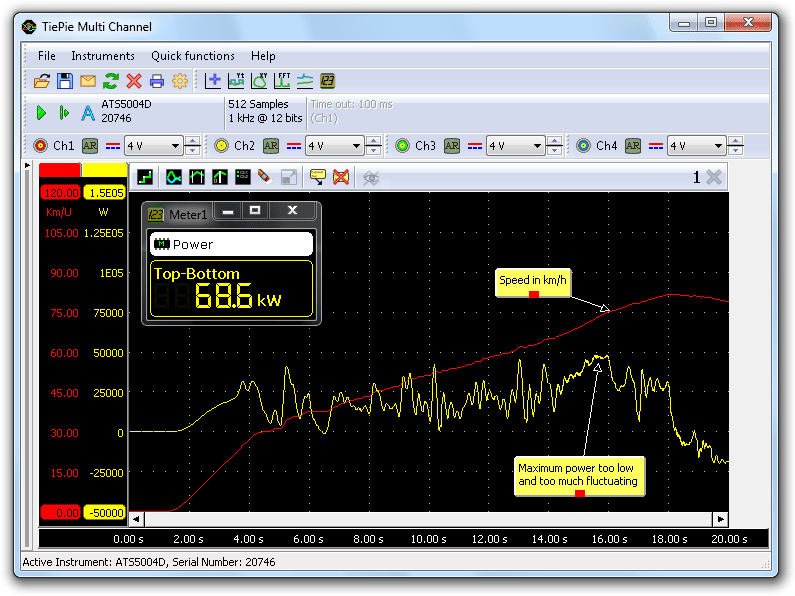 Figure 1 shows an acceleration from 0 to 80 km/h in about 16 seconds, a strong fluctuating power graph which remains too low and a determined engine power of almost 69 kW. 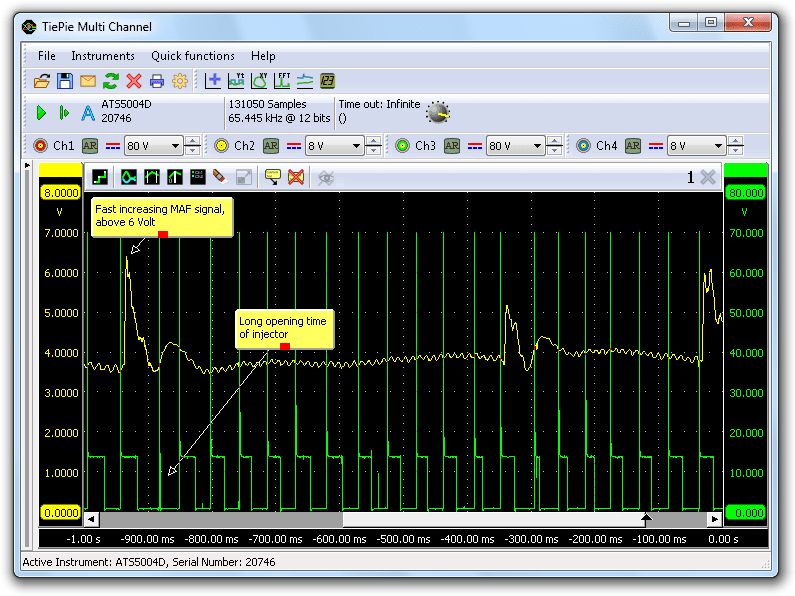 Figure 2: MAF signal and injection signal during engine hold back

Both the MAF signal and the injection signal change when the engine holds back. The MAF signal shows a large increase to even more than 6 V, while it normally remains around 4.5 V. The injector signal shows a long opening time during the problem, leading to too much fuel in the cylinder. The high peaks in the MAF signal turned out to correspond with the explosions in the exhaust.

Ch2 measures the MAF signal. All three signals can be seen in Figure 3. 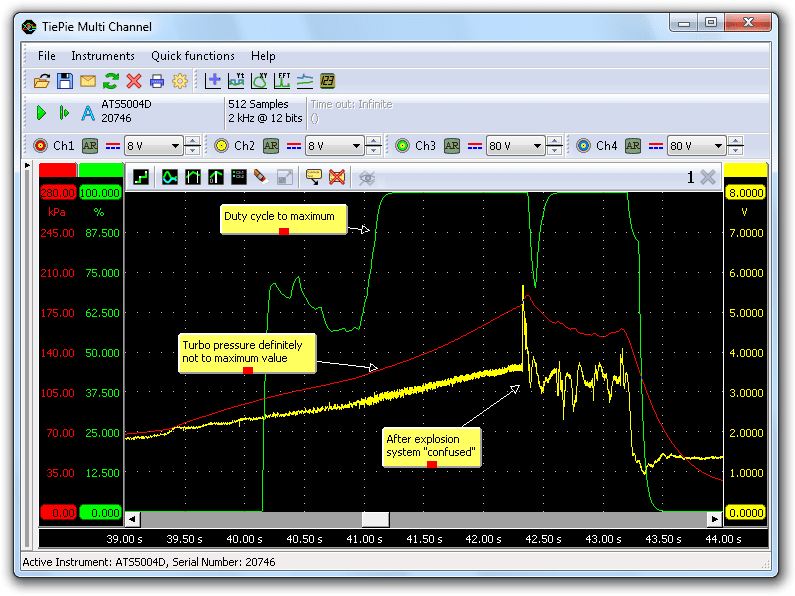 Clearly visible in Figure 3 is that the MAF signal at some point suddenly rises strongly, way beyond a normal maximum value. Shortly after that, the ECM tries to compensate for the large increase in airflow by partly closing the turbo pressure valve, the duty cycle drops to 70%. Instead of improving the situation, that only makes it worse. The MAF signal starts fluctuating and the turbo pressure drops. The conclusion is that the explosion in the exhaust causes the sudden large increase of airflow.

If the MAF sensor is contributing in the problem, it can be interesting to see what happens when this sensor is temporarily disconnected. The engine will normally go to an emergency state and use certain default values. It turned out however that the the engine still showed the same problems: holding back and explosions in the exhaust. That indicated that the wrong path had been followed. 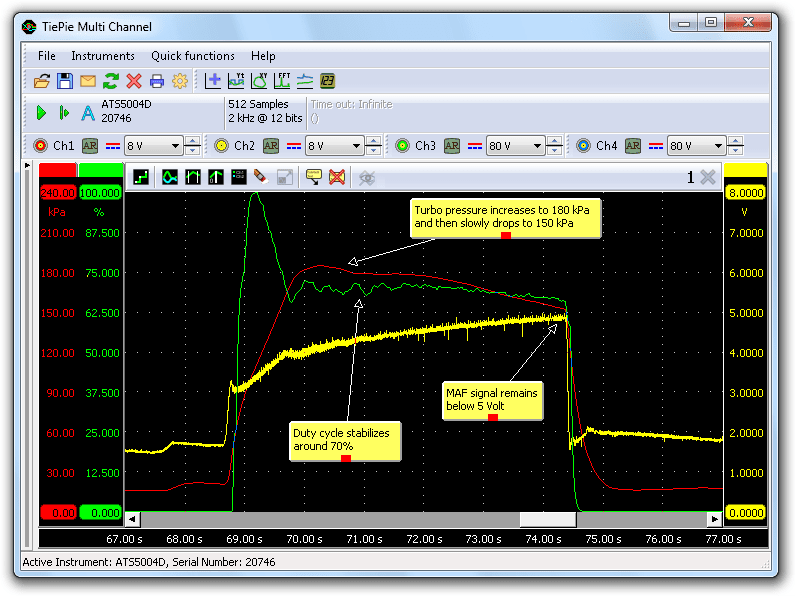 The problem was solved by replacing the fuel pump. Figure 4 shows the turbo pressure and the MAF signal after replacing the pump. Pressure build-up and MAF signal look good and the duty cycle stabilizes at 70%.

This car proves the importance or proper diagnostics: start with the basics and do not skip parts.

The explosions in the exhaust were probably caused by a too lean fuel mixture. Due to the increase in the MAF signal caused by the explosion, the injectors were opened a bit longer, which kept the engine running. But then the system stabilized in a too lean situation again and the process repeated. With the new pump, the engine power was measured again, now generating 108 kW, as shown in Figure 5. 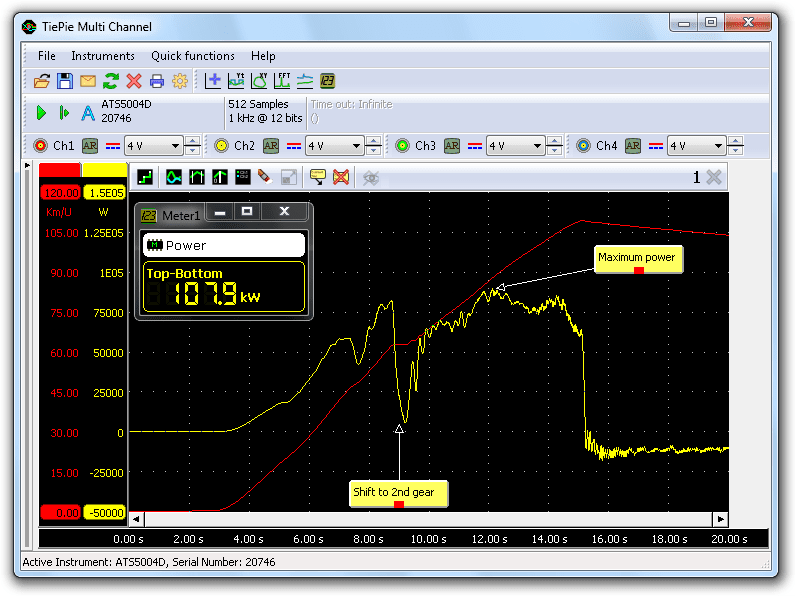