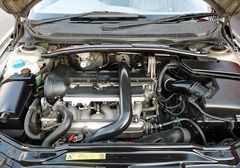 A GMTO customer received a 2001 Volvo XC70 for repair. The owner of the car had bought the car second hand from another garage. When he got the car, it showed some problems, which the garage he bought it from could not solve. One of the things they had done was to replace the exhaust camshaft adjustment unit, which did not solve the problems.

The car was then brought to another garage, the GMTO customer. There, the following error codes were read from the car:

These different codes can indicate separate problems, but can also be caused by one problem. A wrong camshaft position is likely to be caused by a direct mechanical error. The Electronic Control Module (ECM) measures the camshaft position and the crankshaft position with sensors and when their relation it not OK, an error code can be stored. The other codes are indirect codes, they can be caused as result of a malfunctioning component in a different area. It is therefore not strange to look in the area of the camshaft first and to replace the exhaust camshaft adjustment. The fact that this unit is well available in the after market circuit indicates these units are more often replaced.

The second garage decided to replace the inlet camshaft adjustment as well. This unit is part of the part of the exhaust camshaft pulley, replacing it requires the timing belt to be adjusted again. It did not solve the problems with the car and GMTO was contacted for assistance.

The Automotive Test and Information System ATIS] provides special oscilloscope settings for measurements like this. It shows how to connect the automotive lab scope to the components in the car. It also sets up the automotive diagnostic oscilloscope to the correct settings. For this measurement, the oscilloscope is set to measure for 2.6 seconds with a high sampling rate. The oscilloscope is set to respond to a manual trigger button. The car is driven and the measurement is started. Once the engine holds back, the manual trigger button is pressed and this tells the oscilloscope to store the signals. With this setting, even 2.3 seconds of the signals before the trigger button was pressed are saved, making it possible to examine what happened when the engine held back. Figure 1 shows the measured signals. 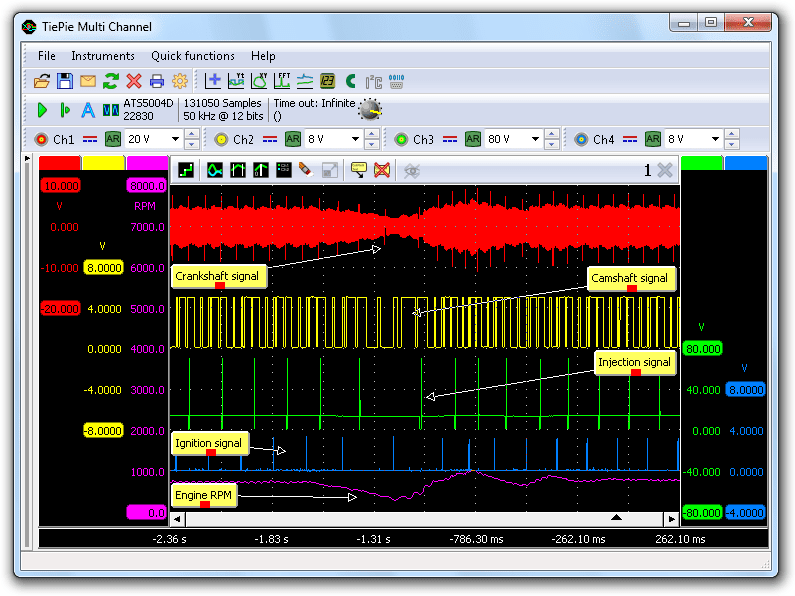 Apart from the four signals from the car, this measurement also contains a graph with the rpms of the engine. This graph is created using the RPM I/O, which converts the crankshaft signal to an rpm signal.

In the rpm graph, it is clearly visible that the engine holds back, the graph drops significantly. All other signals remain present and the engine rpm restores to its original value. This tells us that base of the motor management system operates properly and the cause of the problem is to be found elsewhere.

Since one of the reported errors involves the camshaft timing, it was decided to focus on the relation between the camshaft signal and the crankshaft signal. In the past, a measurement on the relation between these to signals was done on a similar engine, which had no problems. This engine has an adjustable exhaust camshaft timing, controlled by a signal from the ECM. To create a good reference, the two signals are measured with a disconnected exhaust camshaft adjustment unit. The signals from the good engine are seen in figure 2. The falling slope in the camshaft sensor signal is 10 teeth (pulses) before the reference point in the crankshaft signal. The same measurement is also done on the problem engine, the result is shown in figure 3. 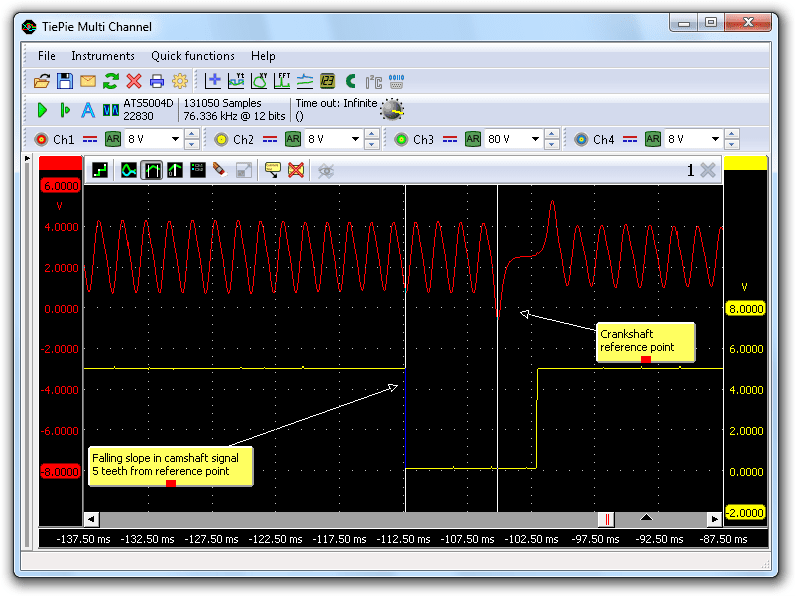 The signals show a big difference, the falling slope in the camshaft signal is now 5 teeth before the reference point in the crankshaft signal. The crankshaft has 60 teeth, which generates 60 pulses per revolution, or one pulse per 6 degrees. The camshaft of this engine is 5 * 6 = 30 degrees late, a significant difference. The garage was contacted to inquire whether camshafts were adjusted properly after replacing the adjustment units. The replacement units were delivered with a special adjustment tool, which the garage claimed to have used. Still having doubts about the proper adjustment of the camshaft, the search for the cause of the problems continued, focusing on other components.

Two reported errors concern the fuel air mixture and the Mass Air Flow (MAF) sensor. These two have a direct relation to each other, so it was time to test the MAF sensor signal. The automotive oscilloscope was set to measure continuously for a long time and also loaded with a reference signal from a good MAF sensor. The contact was switched on and the engine started and then slowly revved to higher rpms. The signals are shown in figure 4. 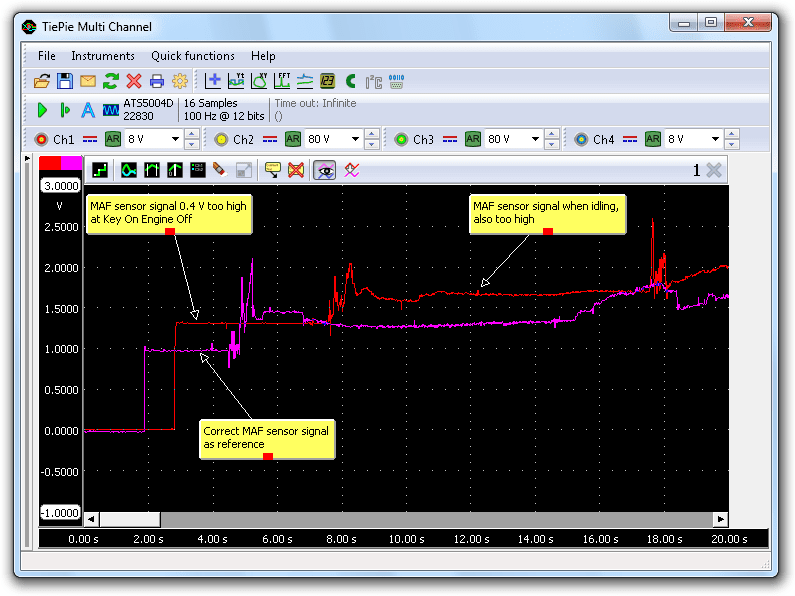 Both signals show a similar pattern, a bit shifted in time. The signal from the MAF sensor appears to be 0.4 V higher than the reference signal, during the whole pattern. This indicates a possible problem with the sensor, explaining the two errors about the mixture and the MAF sensor.

This engine uses a sophisticated MAF sensor, which not only determines the amount of air that passes, but also is capable of determining the direction of the air flow. The sensor has a special air path through which the air flows, indicated with the arrow in figure 5. A heat film located in the air path (the white rectangle) detects the air flow and direction. The signal conditioning electronics in the sensor generate the output signal.

After consulting the garage, the MAF sensor was replaced by a new one. The engine was now running better, but still not as it should be.

Back to the camshaft timing

There were still doubts about the proper adjustment of the camshaft. The camshaft is driven by a gear. Changing this gear one tooth introduces an angle difference between crankshaft and camshaft of 18 degrees. The camshaft in this engine was 30 degrees late in comparison to a good running engine. Adjusting the gear one tooth to advance the camshaft, gave a major improvement. The engine was now running much better and produced much more power. It was also not holding back or stalling anymore. Other mechanical adjustments were done, bringing the camshaft to only 6 degrees late. The engine was now running fine and the check engine light would no longer light up. The garage was advised to do a thorough readjustment of the camshaft timing.

This car had two independent problems causing the engine to run badly, making troubleshooting more complicated. However, by measuring the basic vital signals for the engine with a proper automotive oscilloscope, like the Automotive Test Scope ATS5004D, the cause of both problems was revealed.