Measuring a signal voltage of an injector (indirect injection)

Workings of an injector

An injector sprays pressurized fuel into the inlet system or a cylinder. Due to the small opening in the injector and the high pressure, the fuel is atomized when it leaves the nozzle.

The particular injector measured for this article contains a metal pin that is kept pushed against a small opening by a spring. A coil is placed around the metal pin. A strong enough current flowing though the coil generates a magnetic field lifting the pin off the seat, opening the injector. While the current remains, the injector is held open. When the current is interrupted, the spring pressure pushes the metal pin back to its original position, closing the opening.

In most cases the injector has a power supply from a system relay and a switched ground wire connected to the ECU. In some cases the ECU controls the positive injector side and the negative side is permanently connected to ground.

Correct functioning of the injector can be checked by measuring the following signal voltages, see figure 1: 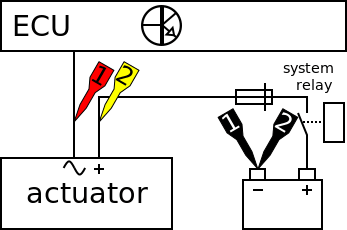 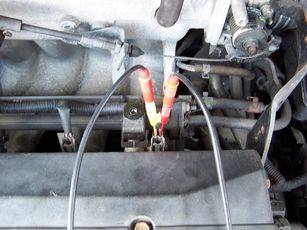 The lab scope is connected to the injector via a Measure lead TP-C1812B and Back Probe TP-BP85 and is set to normal scope mode.

Figure 3 shows a waveform of an injector on an idling engine at operating temperature. This signal can be downloaded and used to correctly set up the lab scope or as reference signal. 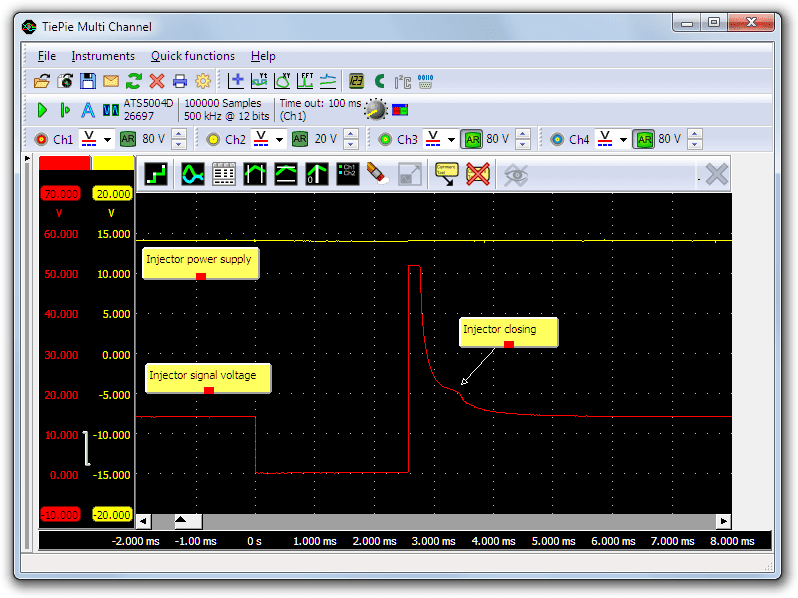 The signal on channel 1 (red) is measured at the negative side of the injector, which the ECU switches to ground. At the beginning of the measurement the injector is not activated, no current is flowing and the signal has the same value as the battery voltage. When injector is activated by the ECU at t=0, the signal voltage drops and a current starts flowing. The current builds up a magnetic field which, when strong enough to overcome the spring pressure, lifts the pin from the seat and opens the injector.

When the injector has been open long enough, the circuit is interrupted by the ECU at t = 2.6 ms. Because the circuit is interrupted, the current stops immediately. The sudden current change causes a high induction voltage. In this measurement the induction voltage is clipped by a diode to approximately 52 V. The built up magnetic field slowly decreases until it is too weak to overcome the spring force, which then pushes the pin back on its seat. The movement of the metal pin changes the magnetic field which affects the signal voltage. This is visible as a small hump in the signal.

Indirect injection current measurement
With a lab scope an injector current is measured on an idling engine at operating temperature. The measured current is shown and can be downloaded. To help determining whether the injector is functioning correctly, different possible deviations from the example signal are mentioned along with possible causes.
Toyota MR2 bad injector
A Toyota MR2 is having problems after an engine replacement, fault code P0304 Cylinder #4 misfire detected occurs. The garage swaps several components but does not manage to fix the problem. Measurements with an automotive oscilloscope are required to find out that the fault code is somewhat misleading and the problem is not with cylinder #4