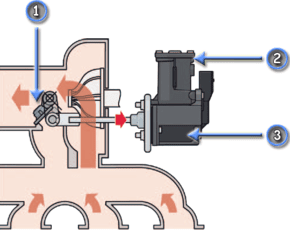 The DC motor is mechanically connected to the waste gate through some reduction gears. Both terminals of the DC motor are electrically connected to the ECU, which controls the DC motor, and therefore the waste gate, in both directions. The position sensor gives the ECU feedback about the position of the waste gate. The sensor is a Hall type with electronics to convert the sensor signal into a voltage from 0.5 V to 4.5 V. The charge pressure sensor is based on the MAP sensor and works in a similar way with increased range to detect the higher pressures.

Correct functioning of the turbo charge pressure regulation system can be checked by measuring the following signal voltages, see figure 2: 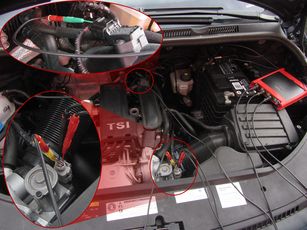 The lab scope is connected to the DC motor, position sensor and pressure sensor via a Measure lead TP-C1812B and Back Probe TP-BP85 and set to recorder mode.

In recorder mode a streaming measurement is performed, continuously displaying the signals live on screen. Most measured signals vary slowly, except for the DC motor control signal. The Automotive Test Scope ATS5004D is set to a streaming speed of 10 kS/s to correctly capture all signals.

Figure 4 shows waveforms of the DC motor, position sensor and pressure sensor of a car which is accelerating through 1st, 2nd and 3nd gear with a engine at operating temperature. This signal can be downloaded and used to correctly set up the lab scope or as reference signal. 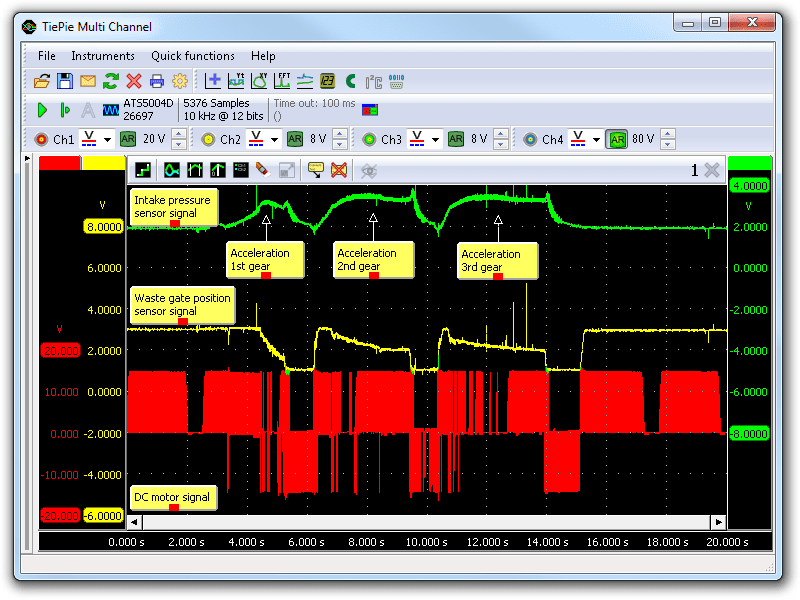 Manifold Absolute Pressure (MAP) sensor
With a lab scope a Manifold Absolute Pressure (MAP) sensor is measured under the following conditions: key on, cranking, idle, 2000 RPM, 3000 RPM and back to idle with an engine at operating temperature. The signal from the sensor is shown and can be downloaded. To help determining whether a MAP sensor is functioning correctly, different possible deviations from the example signal are mentioned along with probable causes.