Workings of the MAP sensor

Correct functioning of the MAP sensor can be checked by measuring the following signal voltages, see figure 1: 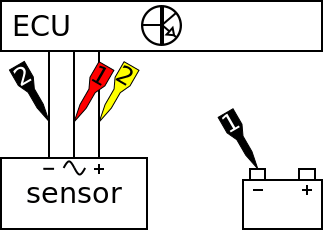 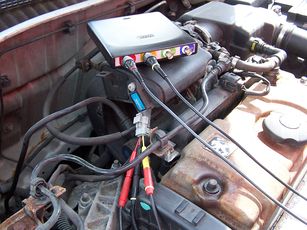 The lab scope is connected via a Measure lead TP-C1812B and Back Probe TP-BP85 to the MAP sensor. The lab scope is set to recorder mode. In recorder mode a streaming measurement is performed, continuously displaying the signals live on screen. Because the measured signals vary slowly, the Automotive Test Scope ATS5004D is set to a slow measuring speed.

Figure 3 shows a waveform of a MAP sensor of a car with running engine. The signals are measured under the following conditions: key on, cranking, idle, 2000 RPM, 3000 RPM and back to idle. This signal can be downloaded and used to correctly set up the lab scope or as reference signal. 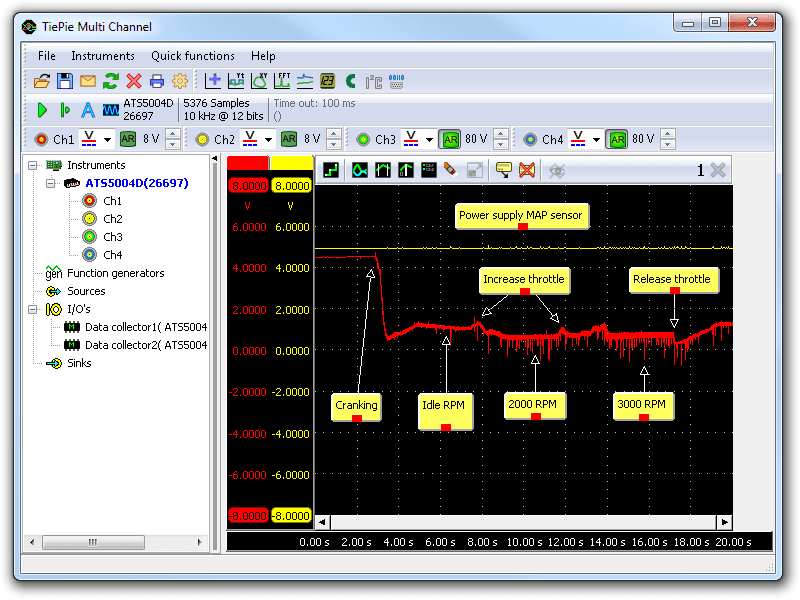 Channel 1 (red) in figure 3 shows the MAP sensor signal. Initially the engine is not yet running and the signal level is around 4.5 V. This signal voltage corresponds to the pressure in the inlet manifold. As the engine is not running yet, this pressure is equal to the outside air pressure. The voltage drops to 0.5 V after the engine fires up and then stabilizes at 1 V. With the throttle in the seated position, only a limited amount of air can pass through, causing a low pressure of 350 mBar in the manifold, corresponding to a sensor signal of 1 V.

Spikes of the ignition are visible in the signals. These spikes have no effect on the operation of the engine management system because the ECU has filtered inputs.

The throttle is opened twice during the measurement to increase the engine speed to 2000 and 3000 RPM. At both moments the pressure increases shortly and quickly drops after that, due to the higher engine speed which demands more air to pass though the engine. At increasing speed, the signal band becomes wider, caused by the larger pressure variations at higher RPM's.

When zooming in on the signal, the individual strokes of the engine become visible from which the engine speed can be determined. Near the end of the measurement, the throttle is released and the signal voltage drops to 0.5 V and stabilizes around 1.1 V at idle speed.

You can view the signals from this measurement by downloading the measurement and open it in Multi Channel oscilloscope software.