Workings of a servo hydraulic injector

Today's advanced diesel engines are getting more powerful and quieter. A part of this achievement can be contributed to the way the fuel is precisely injected. Mechanical direct injection has been used in diesel engines for a long time. It can be precise, but to achieve lower emissions, it has been replaced by electronically controlled direct injection. An electronic injector can be precisely controlled by an ECU.

The direct injector measured for this article is of the servo hydraulic type, pictured in figure 1. The following parts can be distinguished:

When an injection is needed, the ECU opens the control valve by applying a voltage to the coil. When the control valve lifts, pressure is released from the base of the injector needle. The difference between the low pressure at the base of the injector needle and high pressure at the tip causes the needle to move from its seat and allow fuel to pass through.

To stop the injection, the control valve is closed, causing the fuel pressure at the base of the injector needle to increase, making its spring push the needle back to its closed position.

Correct functioning of the servo hydraulic injector can be checked by measuring the following signal voltages, see figure 2: 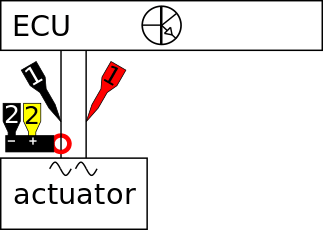 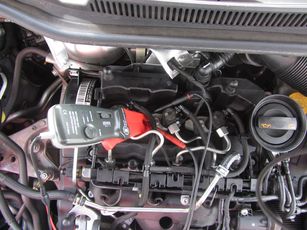 Channel 1 of the lab scope is connected to the servo hydraulic injector via a Measure lead TP-C1812B and Back Probe TP-BP85. The current is measured with a Current clamp TP-CC80 which is connected to channel 2 of the lab scope with the use of a Measure lead TP-C1812B. The Current clamp TP-CC80 is set to the 20 ADC range and outputs a voltage of 100 mV per 1 A. To get a readout in Ampères, the current clamp's signal voltage has to be amplified 10 times. This can be done via the menu item "probe settings" in the right click menu of channel 2. In that same menu the "Set unit..." can be used to change the unit to 'A'. The lab scope is set to normal scope mode.

Figure 3 shows the voltage at and current through a servo hydraulic injector when idling at operating temperature. This measurement can be downloaded and used to correctly set up the lab scope or as reference signal. 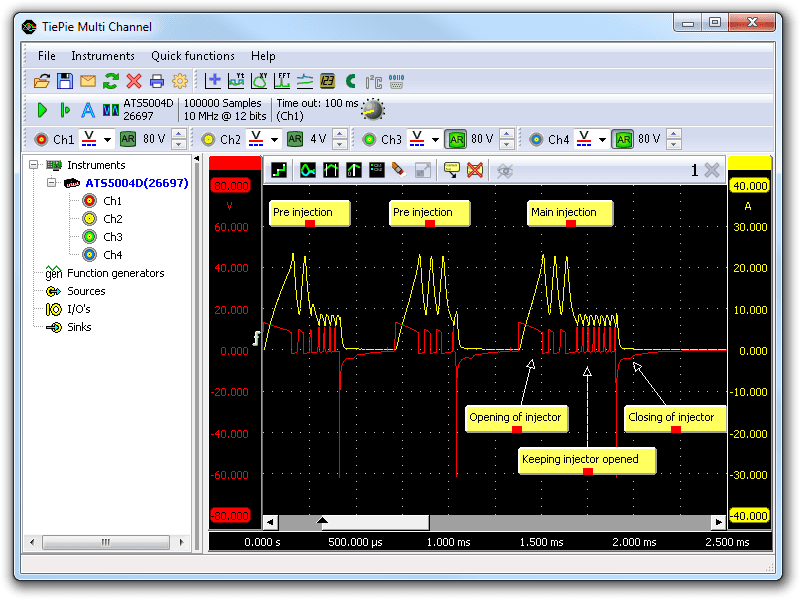 Channel 1 (red) in figure 4 shows the injector voltage and channel 2 (yellow) the current through the servo hydraulic injector. The signals consist of three injections, of which the first two are pre injections and the last is the main injection.

During the injection the current is high but lasts only for about 550 µs. This means that the overall applied energy is low, around 16 mJ for the main injection. 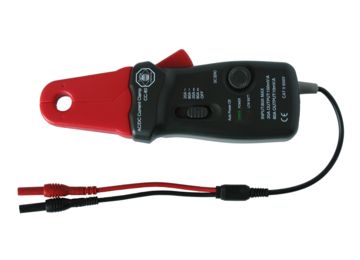